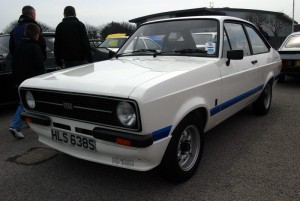 The RS1800 was in production from March 1975 to September 1977. The press cars and the very early road cars were British built using the same body shell as the Escort Sport from Halewood, with the exception of approximately 6 cars which had the new German RS bodyshell in November 1975.

These early cars from March 1975 to December 1975 will have the chassis number starting BBAT. A handfull of these early cars began their conversion at Halewood before moving to the Aveley Pilot Plant to be finished off. Bodyplates denote RS1800, though engine codes are 1600 kent crossflow, German November cars have R as the engine code, 1800 OHC

The later cars were originally the MK2 Escort RS Mexico which were built in Germany at the Saarlouis factory. The chassis number for these cars should start GCAT as in common with other MK2 RS cars.
These RS Mexico’s were then transported to Britain and the Ford engineers at Aveley then removed the OHC (over head cam) engine to put in the BDA (belt driven `A` series) engine along with the oil cooler, the centre exhaust hanger was modified, paintwork around the car was also carried out, mainly the black work on back panel, but also in engine bay and white sill work, though a few cars didn’t receive this.

In many ways the RS1800 can be considered as a BDA powered MK2 Mexico. It shared the same heavy duty body shell, brakes, suspension, split-propshaft, differential, and rear axle.
Apart from the engine there are few different items that other MK2′s do not possess, even the MK2 Mexico VIN plate was retained denoting that the car still had an OHC engine LE.
The last 50 cars built had the 3rd revised inlet manifolds to comply with european emissions, improved pistons, steel crank and 12 bolt flywheel, these cars also have unique X0 stamping on the body plates.

Approximately 109 road cars were built in this period, no accurate figure was ever disclosed by Fords. Currently the RSOC RS1800 Registrar knows of 86 RS1800 with around 75 still in existence.

RS1800 Base.
The options also available were numerous and could be brought off the shelf at any RS dealers. Apart from the custom options there were also rear fog lamp, alloy wheels, remote control door mounted mirror, black vinyl roof, tinted glass, and various radio models.

The Custom model was limited to the early BBAT cars, but a few GCAT cars were lucky enough to have these extras from new depending on the customers requirements.

All RS1800`s were produced in Diamond white with the exceptions of one Geneva Motor Show car and one press car JJN 100N that were produced in Carnival Red, and to date another road car leaving the factory in Venetian Red XYD 992S.