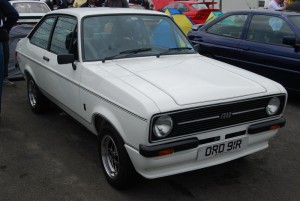 The MK2 Escort RS Mexico was produced between November 1975 and July 1978, all the UK models were built in Saarlouis, the West Germany. Only around 2500 MKII Mexicos were sold over this period. The MK2 was a replacement for the successful MKI Mexico.

The MKII Mexico was produced at the same time as both the Escort 1600 Sport and the Escort MKII RS2000 .

The engine was a 1600cc overhead cam Pinto unit producing 95bhp at 5750 rpm. To fit the this unit into the standard Escort MKII body shell a number of components needed modification:

The gearbox was a 4 speed Type-B unit featuring a quick shift action. The rear axle is known as a Timken (or English) type this was mounted using forward facing radius arms bolted to the chassis rail.

Steering was non power-assisted and used a rack and pinion. Front suspension was via independent MacPherson struts and Sachs dampers. The rear also used Sachs dampers with multi-leaf springs.

The front seats were ‘Recaro’ style made by Scheel and were the same as those fitted to the early MKII RS2000 . Competition front bucket seats were listed as an optional extra. A sports steering wheel was fitted with a five white needle instrument cluster.