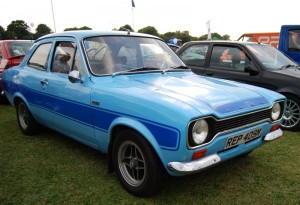 The Escort RS2000 was the last car to be introduced to the AVO production range, introduced in the June of 1973. The car fitted nicely into the AVO range with its performance almost comparable to the complex RS1600, but with the reliability and ease of maintenance as the Mexico.The original name for the car was to be the “Puma”, but it was decided to keep with the RS tradition and so it was re-named the RS2000.The car used the same type 49-body shell as the Mexico and RS1600. Fortunately, there was a new engine in use at ford, the 2-litre overhead cam pinto design, which Ford then decided to use instead. Fords then had the major problem to persuade the new bulky pinto engine to fit into the engine bay, which was something it had never been meant to do. The only way of achieving this was by discarding the engine driver cooling fan and replacing it with a thermostatically controlled Kenlowe fan. The engine produced 100bhp (2bhp more than in the Cortina).The gearbox was the German type e-box and was totally different from the RS1600. They used a final drive of 3.54:1. The car was launched in England on 11th October 1973 priced at �1586.It was claimed that the first 2000 cars were built between the June and September of 1973, and were reserved for the German market, which is why British buyers could not get hold of the cars until the October of that year.Although group 1 homologation was achieved (5000 units built) it is now accepted that around 3500 RS2000 cars actually left the production line at Aveley. It has been claimed however, that over 1000 cars were produced on the Ford production line at Saalouis in Germany, although no solid evidence of this is to hand.The early cars were fitted with the superb German scheel seats, but these were replaced with Fords own RS cloth seats for the British market.At the AVO factory Ford built 4 Mexico estates, with one of these being later converted into a RS2000 estate by the request of Charlie Reynolds. To our knowledge this car still exists and is located in Bristol.
The AVO factory was closed in December 1974 to make way for the development and manufacture of the MK2 escort.
Mk 1 Escort RS 2000 Specification