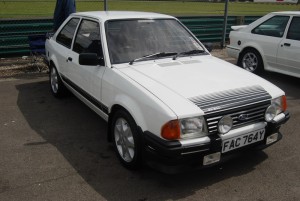 The transmission was a 5-speed B5-gearbox with a different fifth gear ratio of 0.83:1, all other Escorts used 0.76:1 ratio. Front suspension was very different from other Escorts, it used two longitudinally mounted supporting arms with separate anti-roll bar. These provided the castor angle to be adjusted, which was required for racing purposes. It also reduced torque-steer effect, which is the problem in powerful front wheel drive cars. Outside the car was fitted with front and rear spoilers, these were unique to RS1600i. Up to 9 optional extras could be added to the spec including tilt/slide glass sunroof, electric windows, central locking, tinted glass, opening rear ¼ windows, different radios and rear seat belts combinations. The Executive Pack option combined the sunroof, electric aerial and RST 21P Radio/Stereo cassette.