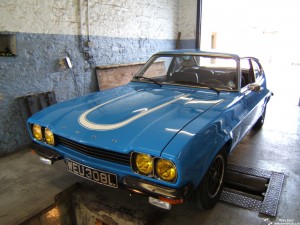 The production approval for the first RS Capri the Capri RS2600 was received by FAVO at South Okendon in Oct 1969 by March 1970 a car had been completed in readiness for the Geneva Motor Show albeit with a mock up injection system, the next group of 50 cars built for Homologation purposes at the Niehl Plant were all lightweight models these cars did not have fuel injection but they did have the long throw crankshaft to give them over 2.6 litres as required for competition, they also featured glassfibre doors, boot and bonnet made by BBS they had no heaters or carpets they even cut down on paint and fitted sliding perspex windows in an attempt to achieve the 900kg required for racing but the build quality of these cars was so poor the car was not legal to sell in Germany.
By September 1970 the first production RS2600 rolled off the line at the Niehl Plant only to find that on full lock the wide alloy wheels fouled the front wings, resulting in the unique front wings on the RS2600 and RS 3100 as we know them, unlike the lightweights. The Scheel seats used in the production RS2600 were reclining not fixed back, these remained throughout the whole production although the material changed in October 1971 when the major changes took place, including the fitting of ventilated front discs, revised ratios to gearbox and rear axle, the addition of quarter bumpers in chrome both front and rear with the front ones incorporating the indicators. Earlier models used Mk1 Escort items let into the front panel. These 1971/72 cars also ran revised suspension settings.
In September 1972 the whole Capri range was facelifted, this saw the RS2600 with new 4-spoke RS alloys, a flat 3-spoke steering wheel, black finished bumpers all round with full width at the rear, it also featured a Decal kit and a front spoiler. Production of the RS2600 since 1972 was now taken care of at the Saarlouis Plant. There were a total of 3,532 cars built between 1970-75 with the most in 1 year being 1360 in 1972 and just 1 in 1975, there were 256 RS Capris exported to France and 43 exported to Austria, the last car sold in Austria in 1975. The RS2600 was available in any colour of the Ford range although most of the pre-facelift cars had Satin Black bonnets and engine bays, there was also a host of options available including radio, sunroof and LSD.