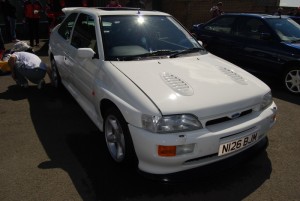 The Escort Cosworth was based on the outgoing Sierra Cosworth floor pan, although this Escorts basic shape looks the same as the every day Mk5 Escort the rear 1/4's were built to be a little longer. This made the mating of the shell to the floor a little easier.

Engine
The Cosworth YBT engine was based on the Sierra Sapphire 4WD Cosworth unit.

Body
The 2 door shell needed extensive modifications by Ghia to use the larger Cosworth engine and transmission.

The Escort Cosworth was based on the outgoing Sierra Cosworth floor pan, although this Escorts basic shape looks the same as the every day Mk5 Escort the rear 1/4's were built to be a little longer. This made the mating of the shell to the floor a little easier.
Tilt and Slide FFSR (Factory Fitted Sun Roof), Electric windows and mirrors, Central Locking, and Tinted Glass, were all standard equipment.
The rear tail gate featured a large double whale tail spoiler, bringing back memories of the Sierra 3 door Cosworth. The Escort was later available with a smaller rear spoiler which was necessary for type approval in countries such as Switzerland.

Trim
Front Recaro seats, with adjustable head restraints were used.
Various trim levels were available:- Motorsport & Lux, Leather was an optional extra.
Later a limited edition was available named 'Monte Carlo', these were produced in a new range of colours and included Oz styled wheels as used on the WRC cars, a new cloth trim with Monte embroidered in the seats and various other items exclusive to the Monte.

Later Escort Cosworths used a smaller T25 Turbo unit and revised ECU, this made the car a little more driveable in standard trim than it larger T3 turbo version.
At the end of Fords Escort Cosworth run it was offered without the Large upper rear spoiler.


The Ford Escort - Most successful rally car in the world
In 1968 the newly launched Escort Twin Cam kicked-off a 30 year winning spree with a spectacular first season scoring enough international rally victories to secure the coveted World Rally Championship for Makes. Ford Escorts of all types, competing at all levels, were successful rally winners up to the turn of the century, and even today are still occasionally winning events all round the world.

When those original Escorts first appeared, Ford cars were already known as fine rally cars, following high-profile victories in the world's most important rallies - Monte Carlo, Safari, Acropolis and RAC. The birth of the Escort was to boost Ford's motorsport fortunes still further: by any measure it would go on to become the world's most successful rally car.

In 1968 the original 1.6-litre Escort Twin-Cam started its competition career in an astonishing opening season - by winning the Circuit of Ireland, Dutch Tulip, Austrian Alpine, Acropolis and Scottish rallies, all within eight weeks. By the end of its first season, the Escort had also won the famous 1000 Lakes Rally in Finland, which helped Ford secure the World Rally Championship for Makes. Ford Escorts won the World Championship again, in 1969.

The 'works' Twin-Cam Escorts continued to win all round the world in 1969 and 1970, while special overhead-valve-engined cars dominated the toughest ever event the 16,000-mile London-Mexico World Cup rally of 1970, taking first, third, fifth, sixth and eighth places. As a result of this victory, the Escort Mexico production model was developed.

As the Ford Escort was developed through the 1970s, the 1.6-litre 16-valve RS1600 took over from the Twin-Cam. By this time, the cars had an amazing reputation for strength and reliability. Engines for motorsport were progressively enlarged, first to 1.8-litres with 205 bhp, and later to 2.0-litres with up to 250 bhp.

By 1975, RS1600s had won world-class rallies as different as the East African Safari (1972, when Hannu Mikkola and Gunnar Palm became the very first European-based crew to win this long and gruelling event), the British RAC (three times in succession, 1972 - 1974), the Finnish 1000 Lakes (five times), the Arctic Rally in Finland and New Zealand's Heatway Rally.

No matter what the competition, the surface, the conditions, or the nation, the Escort was always successful, at all levels of the sport. Near-standard Group 1 Escorts (this is the 1970s equivalent of today's Group N 'showroom' category) were also often victorious, memorably with three consecutive outright wins in the 1974, 1975 and 1976 Tour of Britain events, which combined racing with rallying.

A new-style Escort, the 1.8-litre RS1800, emerged in 1975, and within months the Boreham-based 'works' team had turned it into a formidable World Championship machine. Its first outright victory came in the 1975 RAC rally, when Timo Makinen completed a personal hat-trick, and the Escort took its fourth straight win. Ford retained the RAC trophy in the following year, 1976, when Roger Clark won for the second time in an Escort - four years after his first RAC triumph.

Roger Clark, Hannu Mikkola and Bjorn Waldegard spearheaded the 'works' team's international charge in the following years. As ever, the Escorts were still the class of the field. Bjorn Waldegard won three of the world's most punishing World Championship rallies in 1977 - the East African Safari, Acropolis and RAC events, and the Swedish in 1978, while Hannu Mikkola also won the RAC rally in 1978.

Throughout this period, drivers used Escorts to win hundreds of events at World, European and National Championship level. One of those Ford rally experts, Gilbert Staepelaere of Belgium, won more events than any other individual driver in Europe. The Ford Escort was also unbeaten in the British Rally Championship for eight consecutive years, from 1971 to 1978.

In 1979 the Ford Escort then made a clean sweep of the World Rally Championship. By the end of the year, the well-developed and versatile RS1800s had won five World Championship rounds, in Portugal, Greece (Acropolis), New Zealand, Canada and the UK (RAC) - the RAC being won for the eighth consecutive occasion.

Not only did Ford win the World Manufacturers' Championship in 1979 - for the third time in twelve years - but Bjorn Waldegard also became World Drivers' Champion, with team-mate Hannu Mikkola close behind him.

As the 'works' team concentrated on developing new models for the 1980s, another member of that famous team, Ari Vatanen, spearheaded a privately-financed Escort rally team which contested the World Rally Championship in 1980 and 1981. After winning the Acropolis rally in 1980, Ari went on to win three more World Championship events in 1981, and became the first, and only, privateer ever to win the World Drivers' Championship.

At the same time the production Escort range went front-wheel-drive and was clearly never going to be competitive at a world level and with the introduction of Group B all the 'works' effort went into the four-wheel-drive RS200s followed later by the Sierra RS Cosworth, but the Escort was never forgotten.

In 1993 a new-generation of Escorts triumphantly returned to International rallying. In its very first World Championship season, the turbocharged four-wheel-drive Escort RS Cosworth won no fewer than five World Championship rounds, with four second places to back up that achievement. It was an amazingly versatile machine, for there were victories on Portuguese gravel, on the twisting tarmac of Corsica and San Remo, and on one of the toughest of all World Championship rallies, the hot and dusty Acropolis event.

In 1994 Francois Delecour's Escort RS Cosworth won the Monte Carlo Rally, while Tommi Makinen's victory in the 1000 Lakes proved the strength of the modern-day Escort. As in 1993, this success was matched by many victories in European, British and other International Championships.

In 1995, the Escort RS Cosworth won rallies all around the world, both in Group A and Group N form. Not only did this Escort model win 25 European Championship rounds, but it also won Championships as far apart as Africa and Austria, Switzerland and Portugal, Finland and Turkey.

To suit the latest World rally regulations for 1997, Ford then evolved a new version of the Escort, the World Rally Car. This 300 bhp turbocharged model won two World Championship rounds, one being the toughest of all rallies, the Greek Acropolis: both wins went to double World Champion Carlos Sainz, who had joined the team in 1996. In a desperately hard-fought series, the Escort WRC also took second place in the World Rally Championship for Makes.

Further improved for world-class motorsport, the Escort WRC was used by the Ford 'works' team and many private teams during 1998, and recorded several podium positions during the season. Even at the end of its career, and as in every one of the previous 30 years, the Escort was still one of the world's most formidable rally cars.

The Ford Escort, in its many forms, has won 46 world-class and World Championship rallies, and innumerable national and International series - privately-owned Escorts continue to record victory after victory, and will surely add fresh entries into the record-books in the months, and years, to come.