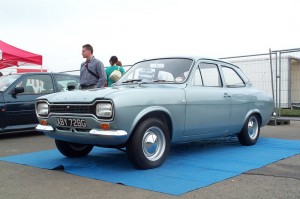 The 110bhp Lotus-powered Escort Twin Cam was conceived and developed by Ford’s Boreham based competitions department during 1967 and unleashed on an unsuspecting public during January 1968. It went on to achieve many international race and rally victories during its short production life. Ford entered it’s first event with the Escort. It took part in the new formula of motorsport, Rallycross and took part at an event at Croft (still used today), the Escort Twin Cam won 4 races out right.
The car’s first international win was on the 1968 Circuit of Ireland Rally when driven by a certain Roger Albert Clark. Off road & on the track this was the car to beat. The twin cam took wins in countries all over the globe, from the forest stages in the UK to the Safari rallies in Africa.

The final appearance of the twin cam was during 1971′s safari rally.
Approximately 883 cars were built in total but no Escort Twin Cam was ever built at the AVO plant. However, as all subsequent performance RS Escorts used the Twin Cam as a basis this cars is seen to be the Birth of the RS marque, Production of the Escort Twin Cam ceased in June 1971 as by this time, Ford was already producing an exciting new Escort, the 16-valve Cosworth BDA-powered RS1600.